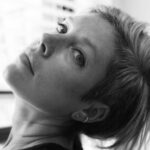 Language is the driving force behind my work. I am interested in the intersection of the body, word, and object as a means of gaining deeper insight into how we communicate with each other—how we formulate identity (or hide it)—as well as to how language's inherent blind spots affect our sense of collective consciousness. I explore these concepts through site-specific installation, performance, sculpture and digital collage. Emphasizing the glitch or rupture, I use these media to obfuscate, reveal, and choreograph the ways in which viewers encounter physical and psychic space: to question our understanding of linguistic and cultural inheritance.

In the Odyssey, the word chōros in its masculine form refers to a liminal space as [fixed] location; also as land, country or territory. According to the Aristotelian definition however, chōra (feminine tense), is similar to place (topos) defined as “a surface-area that encompasses its contents in the manner of a vessel.” Chōra is different from void (kenon or chaos) from which all creation springs but is rather, more like “a territory that is made to appear through a continual remaking or reweaving of its encompassing surface.”

I have long been fascinated with the subject of architecture: how it defines, dictates and determines behavior, how it reinforces social stereotypes, concretizes or transmutes gender norms and most importantly, governs our relationship to self. These spaces, the physical spaces we occupy as persons and members of society, are not passive, imparting an undeniable influence on our ‘internalized architecture’ or sense of being. I am equally as interested in the psyche, and how philosophical thought constructs—in both its linguistic and historical formations—our perception of the world and our place within it. It is within this framework of interest, first as a woman and second as an artist working with site-specific installation, that while on a residency in Brescia, Italy last summer I found myself drawn, as if by gravitational pull, to the physical and psychic weight of the city’s ample ruins. Contained within their looming forms were references to a historic but palpable cultural past that has defined the West’s restrictive relationship to space and that, in my mind, is ripe for re-writing.

Language and its analysis have always been at the core of my practice and it is here that I began my research. I was inspired by the writings of Indra Kagis McEwen and her thesis outlining the etymological evolution of the terms chōros and chōra, as can be traced from pre-Socratic fragments to Plato’s more fully realized treatises. The resulting series of sculptural objects on which I have been working, along with a series of performative collages, video, and movement-based works bridge the gap—both in their mobility and references to the organic body—between these etymologic points of origin, marking territories through a continual remaking or weaving dictated by gesture, position, and movement. It is with this multidisciplinary visual language in mind that the Chōra series attempts to unravel the Western preoccupation with fixity, a Platonic notion that has traditionally governed our understanding of how the body occupies space and its associative hierarchies. In its stead, through the imagistic and performative juxtaposition of my and others’ [feminine] bodies with ancient sites and historic monuments, this work proposes an architectural language of movement, weaving, and decay as opposed to rigidity, monumentality, and stasis. 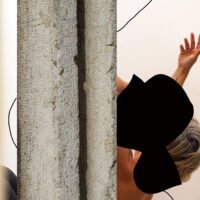 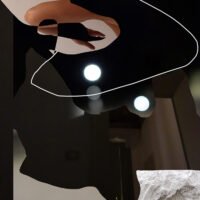 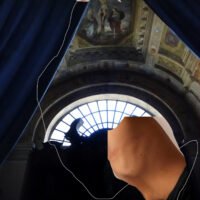 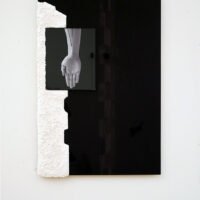 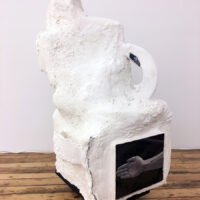 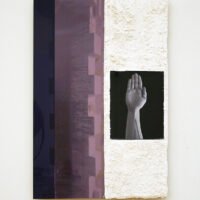 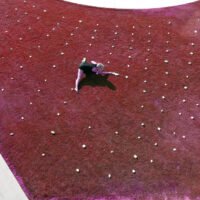