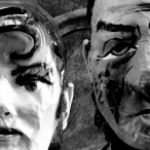 Peñafiel creates experiences about those on the underside of the world’s major conflicts: the migrant, the laborer, the surveilled. Clashing ideologies and the repetitive cycles of history produce the human catastrophes that his multimedia installations speak to. He draws the eye to odd angles that our world often intersects at — using sculpture, animation, video, and space to create disturbing reflections of the realities we participate in and witness every day. These unnerving views break us out of the desensitized lull that ongoing crisis creates. Interweaving projection with physical space mirrors the way concepts interact with the real world. Video projection introduces movement, rhythm, and montage to stationary, three dimensional objects. At the same time, these objects provide weight and fixed form. This presentation invites the viewer to merge the tactile with the ephemeral, each informing and complicating the other in dialogue. Through visual references to German expressionism and the surveillance state, Peñafiel keeps the work inside a long term discussion about the turning gears of modernity and the alienation it continues to produce. This visual approach brims with an anxiety illustrated in crooked lines, all informed by the dismal cruelties of bureaucracy, the policing of human movement, and empty rituals of labor. The hidden peril of these destructive cycles lends urgency to exploring the history of how we got here, how we perceive what’s going on, and the hard truths of those who must face the darkest parts of the present. That urgency and import is always matched by emotional impact. For Peñafiel, the outcome of his work must bring a visceral change in the viewer, equal parts intriguing and unsettling. These confrontations with injustice through surreal imagery are conjured to produce what we need in the world today: empathy for the oppressed.

Three dimensional trunks and furniture are lashed with rope and dragged by humans, projected in black-and-white on the walls in multichannel video. An interaction between the real and ethereal, in inverse states to the lived experience of migration. Here the people are tricks of light; the things, tangible. Here no one moves, though they carry on forever, step after step, struggling to take things with them.

These migrants are locked in a Sisyphean task of pulling their belongings through an endless cycle of illustrated cities and forest environments. Viewers share the space with the pile of trunks, representing everything the migrants must bring with them: both the external and — as the viewer contemplates the plight of the migrant — the internal.

This play between the physical and the projected video image also deals in the interaction between states of being. In a world of imaginary borders materialized through an ornate state apparatus, status relates to being, to the accepted reality of one’s presence. As people cross lines, they dematerialize, become “alien.”

Depicted in a hybrid of dimensions, styles, and palettes, the effect is one of discordance, contrast, and dialectic. That tension built out of difference exacerbates the exhaustion wrung out of the permanent task of migration. Such a perspective is not uncommon in previous work, which often confronts the plight of the humans who moves across the world and its borders today. 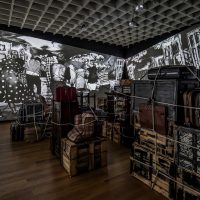 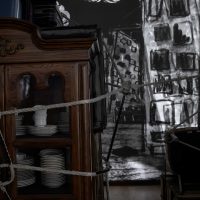 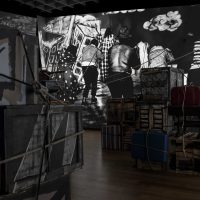